Navigating in the dark

Charlotte du Cann in writing about the most recent and last of its kind Uncivilization festival, touches on ideas that echo inside me, touching something that longs for the same level of purposefulness. I do not want to follow in her footsteps but her story as someone who walked away and found an old/new way to be in this world is like a beacon. She is a way-shower. Her words are like a battle-cry, to those who attended and to those of us excited by the possibility of navigating in the dark. She speaks of writers here but I also take it to mean any creative expression. The following are brief excerpts (Bold emphases mine)

“To navigate the wild world, and to navigate the realms of the imagination means you can’t stay in the tight blinkered form society has trained you to live in. You need to break out and move in all directions in space and time: up into the realm of sky, into the underworld, from the left to the right hemisphere of the brain, back into the past, forward into the future. Writers learn by their art to make these shifts. They know it is not enough to experience phenomena, what you see in the dark has to be brought into the light and articulated, grounded in our everyday lives. That’s the work. It is our function as creative beings to give words to everything we see.”

“Writers bridge time by placing events in a circle, rather than a straight line. That’s when you realise, whatever you are doing now has happened before and it’s time to make your liberating move. Time and transformation are the deep mysteries of the earth, which is why the Empire hates the changing nature of the breathing planet, and all who follow its wild contours. It wants to keep its ancient timeless grip on life.”

“What is the fabric that holds us together and yet does not bind us?
…Mostly it’s a culture at a crossroads, caught in a paradox: because it knows nothing in its reasoning mind, and yet knows everything in its heart and bones and sinews, of how things need to be. Knows that at this point not to give your gift, your words, your song, your presence in the space, feels like a betrayal. A culture that does not disappear into its mind or become mute in the face of everything falling apart, including the story of the person you once were. A culture that puts itself on the line and does not go to sleep, though the lullaby of Empire entices us to forget ourselves at every turn“.

“That’s how a network works. It is invisibly connected through the powerful memory of the heart. Everything we experienced is within us, as we inch our way down the mountain, feeling the unknown territory with our bare feet, the roughness of the stone in our hands, moonbeams spiralling through the trees. That’s what I came to say: a people who see in the dark are a people on their way home.”

“I’m not sure I told you around the fire when I was dancing, when I was running from place to place, when I was standing outside in the rain, watching your faces, sitting beside you at that stream, but I can say it now. Now I’m not rehearsing.”

“The story starts at the end of everything.”

“I once asked a group of high school children ‘What do you mean by a thing?’ First of all, they gave me all sorts of synonyms. They said ‘It’s an object,’ which is simply another word for a thing; it doesn’t tell you anything about what you mean by a thing. Finally, a very smart girl from Italy, who was in the group, said a thing is a noun. And she was quite right. A noun isn’t a part of nature, it’s a part of speech. There are no nouns in the physical world. There are no separate things in the physical world, either. The physical world is wiggly. Clouds, mountains, trees, people, are all wiggly. And only when human beings get to working on things–they build buildings in straight lines, and try to make out that the world isn’t really wiggly. But here we are, sitting in this room all built out of straight lines, but each one of us is as wiggly as all get-out” – Alan Watts

Everything Wiggles by Raph on Mixcloud

(Episode 5 of the Sounds For The End Of The World podcast explores the human condition and limitations that make our planetary problems so difficult to grasp, featuring eye witness audio from both Hurricane Sandy and Katrina, words by writer Alan Watts, The Dalai Lama, NASA’s James Hansen, neurologist Henry Markram and Stephen Hawking.)

The Mourning of the World

The Uncivilisation festival is organized by The Dark Mountain Project, “a network of writers, artists and thinkers who have stopped believing the stories our civilisation tells itself, [Who] see that the world is entering an age of ecological collapse, material contraction and social and political unraveling, and [who] want our cultural responses to reflect this reality rather than denying it.”

At this year’s Uncivilisation festival Andreas Kornevall is supervising the building of a ‘Life Cairn‘ modeled on the one pictured here that he and Peter Owen Jones started in 2011. (from the FB page) “A Life Cairn is raised in recognition and honour for all the species of flora and fauna – mammals, marsupials, birds, reptiles, amphibians, fish, insects, crustaceans, arachnids, trees, lichens and plants of all kinds, that have been rendered extinct at human hands.” The Life Cairn is a sibling to Joanna Macy’s Cairn of Mourning, part of her practice called ‘Honoring our Pain for the World’ from her Work that Reconnects.

Macy’s work teaches that the process of waking up to the reality we face is a spiral that takes us through 4 stages  – and that it can be a one time experience or an ongoing one that we continually move through. Gratitude, Honoring our pain, Seeing with new eyes, and Going forth are the stages for the work.

Mourning is part of acknowledging our pain. Uncertainty is now the horizon line for an ever increasing part of the human community, especially those of us who have been immune and sheltered from much of the chaos and destruction that we have been ignorant of or have refused to acknowledge. This uncertainty and the destruction of the world are in fact intertwined as the reality we thought we once knew is unraveling. The second step toward waking up may be just to acknowledge that there is something to be mourned. There is something lost that cannot be retrieved. It might be our view of the world or our place in it. There is a wild part of us that has died along with the other wild things that are no longer here. As Andreas writes, “The wild is caught in a fireblaze, the flames seem too high to stop.  If we cannot grieve for all that is being lost in the wild, then it was never loved.”

Rima Staines captures this feeling succinctly with her cover art for the ‘From the Mourning of the World’ LP, A Dark Mountain music project. 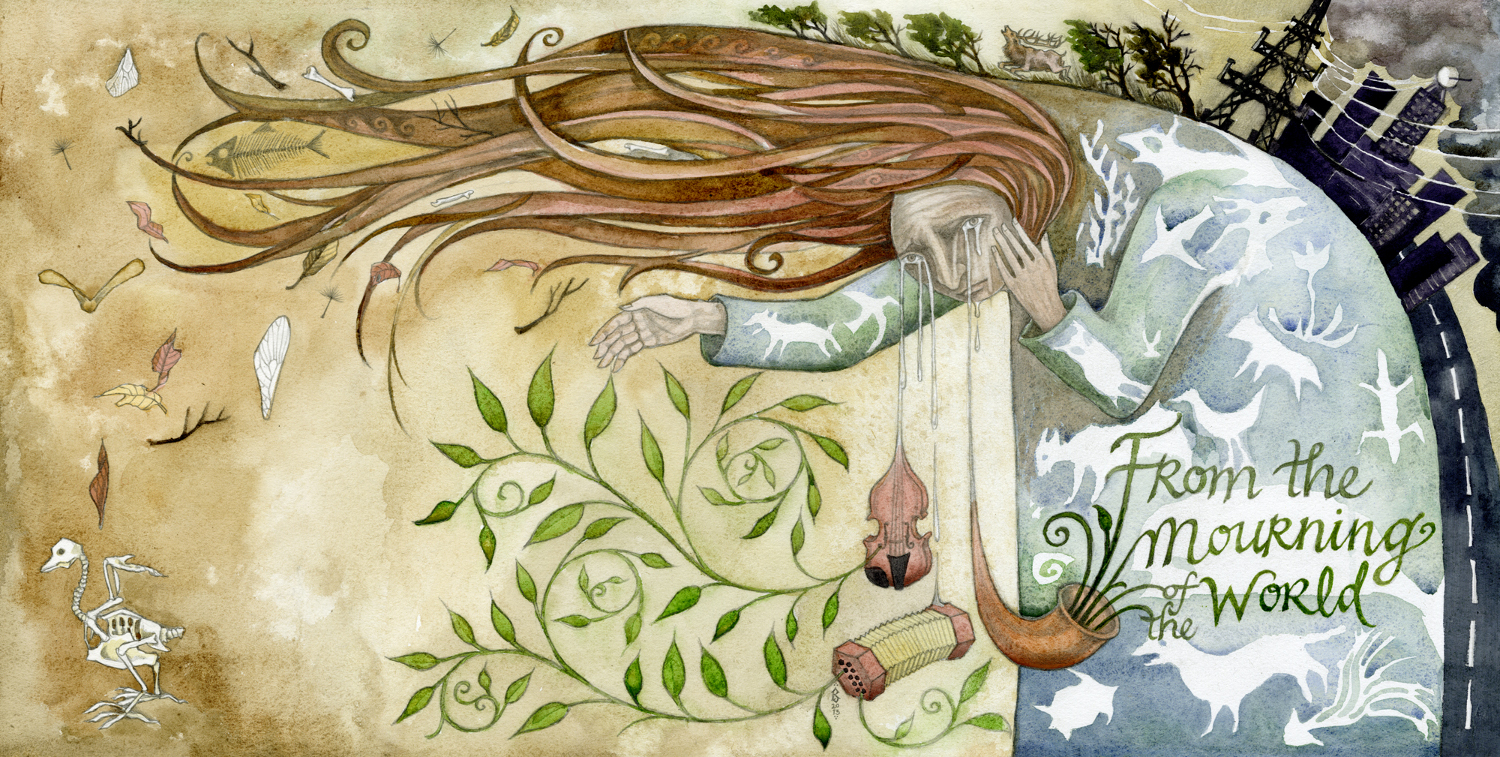 She writes that the world mourns and, “from her tears grows music: music to wail and sing out and bow and strum and beat out the thrum of our griefs. And from the music grow green leaves, spiraling their new life from the alchemy of tears.”

Through these tears will we grow fresh eyes? What world will those eyes envision, within us and without? There will be many hard questions to come.