“Today we have an Easter treat for you: a new episode of The Hedge School Podcast. In this episode, Hedge School founder Dr Sharon Blackie interviews teacher and creator of the Orphan Wisdom School, Stephen Jenkinson (https://orphanwisdom.com/). The conversation is focused on what it is to be an elder in today’s world…”

Reposting this podcast of a conversation between two people I greatly admire, this serves as a reminder that there is great and urgent work still to be done. Both Sharon Blackie and Stephen Jenkinson bring a unique perspective to what the western world lacks in terms of a mythological connection to the land as well as a truly mature human outlook on the predicament of the contemporary catastrophe we find ourselves in.

Here is an excerpt from Jenkinson’s forthcoming book, ‘Come of Age’

“It used to be that age was held in some esteem, considerable esteem even, as the concentration of life experience. Life experience and its many lessons were once the fundament of personal and cultural wisdom. It stands to reason, then, that with this many old people around we should be awash in the authentic, time-tested, grey wisdom that should emanate from them. And there should be cultural initiatives that expose the general population to this wisdom. And this should deepen this culture’s sanity and capacity for sustainable decision making. And that should make us all ancestors worth claiming by a future time, now that we’ve come to our elder-prompted senses and begun to proceed as if unborn future generations deserve to drink the distillate of our wisdom and our sustainable example. At the very least, the distillate of aged wisdom should balance the burden and the books, and old people should have worth as they once might have done, and the culture should break even on the deal. You’d think that this is an inevitable result of an aging population in a civilized place. We should be smarter, deeper, wiser. Especially wiser.

Well, here’s what is becoming glaringly obvious: there is nothing inherently ennobling about aging. Nothing. There’s no sign that anything lends old people steadiness or wisdom or magic from on high or from down below, just because they get old. If we don’t train young people and middle aged people in elder hood we will have no elderhood. There is no such training.

It isn’t any longer a matter of inviting elders, those of them left, back into the fold. They aren’t out there , waiting on our invitation. They aren’t out there. Elders are a sentinel species for humanness, and like other forms of life in our corner of the world they’ve mysteriously gone missing. Young people are, often involuntarily, looking for them, and they can’t find them. How about this: old people are looking for them too. The retreat centres attest to it. If you’re looking for signs of the end times, that alone might do.

I am making the case for elderhood, not for easy agedness. I’m doing so mostly by wondering what happened. Because something happened. Something happened to ancestors and elders and honour. There’s work to be done, and there’s an old wisdom to be learned where there used to be the wisdom of old, and you can’t fix what you don’t understand. That’s where we’re headed: to grievous wisdom. Let us see if we can bear the sound, the particular sound, of no hand clapping.

This is a plea and a plot for elders in training.”

‘Come of Age: The Case for Elderhood in a Time of Trouble’ should be available beginning in July of 2018.

“Everything that has a beginning has an end, Neo.”

A friend of mine that I hadn’t seen for several years died suddenly I found out recently. He was younger than me and in good health.  The news was a shock and it brought back memories of him and I suddenly realized how much I missed him, how much he meant to me back when we worked together.

I don’t think death is something we think about until someone close to us has died or is close to dying from an illness. It is not till then that time and mortality and the existential questions of life seem to be of some importance, at least for most people (I presume).

For Stephen Jenkinson however, death has become his life’s work.

“Apprenticed to a master storyteller, he has worked extensively with dying people and their families, is former program director in a major Canadian hospital, former assistant professor in a prominent Canadian medical school, consultant to palliative care and hospice organizations and educator and advocate in the helping professions”

Jenkinson who is the subject of a feature length documentary , ‘Griefwalker’ has written a new book called ‘Die Wise – A Manifesto for Sanity and Soul’.  In this book he

“places death at the center of the page and asks us to behold it in all its painful beauty. Die Wise teaches the skills of dying, skills that have to be learned in the course of living deeply and well…Dying well, Jenkinson writes, is a right and responsibility of everyone. It is a moral, political, and spiritual obligation each person owes their ancestors and their heirs. It is not a lifestyle option. It is a birthright and a debt. Die Wise dreams such a dream, and plots such an uprising. How we die, how we care for dying people, and how we carry our dead: this work makes our village life, or breaks it.”

Griefwalker the documentary referred to earlier has been available to view on Netflix’ streaming service for some time now but recently has been removed. However there are a few websites that are showing it still and it is embedded below. I highly recommend it for anyone who is dealing with the death of a loved one or family member or who is grieving the decline of the health of the planet. This film contains the beginnings of wisdom for us as individuals and as a culture in the west who has lost its connection with its ancestral heritage.

“Orphans are not people who have no parents: they are people who don’t know their parents, who cannot go to them. Ours is a culture built upon the ruthless foundation of mass migration, but it is more so now a culture of people unable to say who their people are. In that way we are, relentlessly, orphans. Being an orphan culture does not mean that we have no wisdom. But wisdom is being confused in our time with information. Wisdom is an achievement, hard earned and faithfully paid for; it’s not a possession.

Not knowing where you are from is not the same thing as being from nowhere, but it does mean that there is work of all kinds to be done. It could be that the only way for successful refugees to make a culture from their flight is to first be faithful witnesses to what their ancestry now asks of them, instead of what it might have fated them to be. Our culture, if a culture it can be called, or all those things we have instead of a culture, has come to a time of savage despair, it seems. We surround ourselves with generations of the debris of refugeehood, to fill the hollow of orphanhood. We have become a danger to ourselves, and a menace to all who will come after us and to the world. We abandon our dead to make our way, and we are mostly singular people. We might now be the twilight of our ancestors’ dream.

An orphan wisdom might be the only culture-making thing we can rightly, honorably or faithfully claim. There is immense grief in knowing this well and going towards it anyway. That grief could be our way of working now, our labor. It could be our beauty, too.”

Griefwalker (link to the film below) 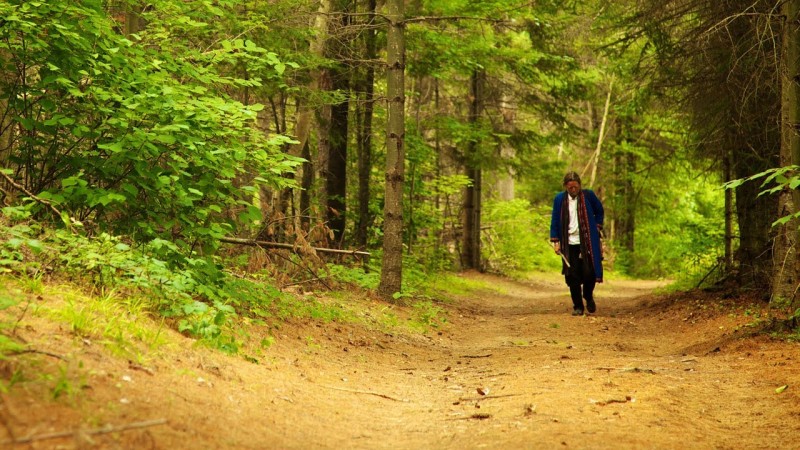