I have saved all my ribbons for thee

David Remnick in his profile on Leonard Cohen shares this coda as Cohen discovers his early career muse, lover and long time friend, Marianne Ihlen, is on her death bed.

In late July this year, Cohen received an e-mail from Jan Christian Mollestad, a close friend of Marianne’s, saying that she was suffering from cancer. In their last communication, Marianne had told Cohen that she had sold her beach house to help insure that Axel [her son] would be taken care of, but she never mentioned that she was sick. Now, it appeared, she had only a few days left. Cohen wrote back immediately:

Well Marianne, it’s come to this time when we are really so old and our bodies are falling apart and I think I will follow you very soon. Know that I am so close behind you that if you stretch out your hand, I think you can reach mine. And you know that I’ve always loved you for your beauty and your wisdom, but I don’t need to say anything more about that because you know all about that. But now, I just want to wish you a very good journey. Goodbye old friend. Endless love, see you down the road.

Two days later, Cohen got an e-mail from Norway:

Marianne slept slowly out of this life yesterday evening. Totally at ease, surrounded by close friends.

Your letter came when she still could talk and laugh in full consciousness. When we read it aloud, she smiled as only Marianne can. She lifted her hand, when you said you were right behind, close enough to reach her.

It gave her deep peace of mind that you knew her condition. And your blessing for the journey gave her extra strength. . . . In her last hour I held her hand and hummed “Bird on the Wire,” while she was breathing so lightly. And when we left the room, after her soul had flown out of the window for new adventures, we kissed her head and whispered your everlasting words.

A Tribute – Bowie Who Bonded Us to Our Weird Selves

Music is the binding agent of our mundane lives. It cements the moments in which we wash the dishes, type the resumes, go to the funerals, have the babies. The stronger the agent, the tougher the memory, and Bowie was NASA-grade epoxy to a sprawling span of freaked-out kids over three generations. He bonded us to our weird selves. We can be us. He said. Just for one day.

It didn’t hit me until a week later, in the studio, why this was such a fitting project. We were immersing ourselves in Bowieland, living in the songs, super-glueing up some fresh wounds. Not just “knowing” the songs, but feeling the physical chords under our sad fingers, excavating the deeper architecture of the songwriting (especially with a tune as bizarre as “Blackstar” (which we realized was constructed like a sonic Russian nesting doll).

Bowie worked on music up to the end to give us a parting gift. So this is how we, as musicians, mourn: keeping Bowie constantly in our ears and brains.

The man, the artist, exits. But the music, the glue; it stays. It never stops binding us together.”

Listen below to all six songs preferably with headphones!

In an interview with Maria Popova, Palmer explains why the timing of this project was so crucial,

“When David Bowie died, I wanted to immerse myself in David Bowie and give myself a work project, because I had been so immersed in motherhood and was struggling with reconciling that with my identity as an artist. I wanted desperately to work, but had cleared my plate of projects because I didn’t know what my life as a mother would be like and I needed to make room for that. So I had this semi-vacuum of time where I was coming to terms with mother-schedule, but I looked at the Bowie tribute and realized I could do most of the project from home, on my computer, in collaboration with Jherek, and I could spend two days at the studio and find a babysitter. I looked at the entire project and thought it was manageable, I could do it right now, which is the way I like to work — fast and furious and surprising and very chaotic and manic.

Jherek was on board to go with the pace, and I knew that if we waited seven months to put out our David Bowie tribute, it just wouldn’t feel the same. It is of the moment, and it was of the moment to sit on the couch and listen to Bowie songs with Neil [Gaiman] and read my patrons’ favorite Bowie songs and go on hunts for obscure tracks and sit there with the baby between me and Neil, immersing ourselves in this artist’s world — because all that felt like part of the project, it felt like part of the patronage.

That was our way of mourning, and that became our ritualistic David Bowie funeral.”

Palmer is asking for a $1.00 donation for the price of streaming the music. As she explains,

“Since it costs me/us about $.54 ($.09 per song x 6 songs) in licensing fees to the bowie estate every time you stream for free, please consider donating that $1 on bandcamp. Any leftover money from the $1 will go to the cancer research wing of Tufts Medical Center (https://giving.tuftsmedicalcenter.org/give) in memory of David Bowie. listen on bandcamp: https://amandapalmer.bandcamp.com/album/strung-out-in-heaven-a-bowie-string-quartet-tribute “

Check out the website http://amandapalmer.net/strungoutinheaven to see more artist, musician and technical credit for all who made this happen so quickly and in such fine fashion. 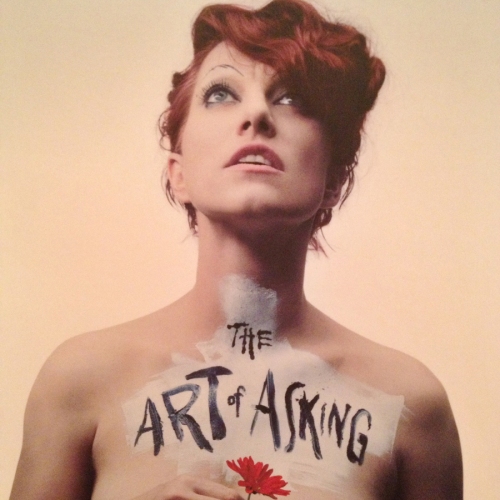 “The Whole World is Music” Part 1

Clarissa Pinkola Estes tells the story of Coyote who is so in tune with its surroundings that it dances to everything, from the rustling of the grasses to the rotating wagon wheels. The others think it drunk and crazy but Coyote is aware, awake, listening, feeling, dancing, living to the sounds of life.

Alfonso Cuaron in talking about his latest film, Gravity, said that there is no sound in space other than the sound the astronauts hear inside their suits from the vibration of their movements. His challenge to Steven Price, the composer of the sound track, that while using no percussive instruments he was to immerse the viewer in the environment of the astronauts, in every experience they faced. Here is an example of one scene that is done to great effect. If you have seen this film, this audio track can transport you back into this particular moment (headphones are great here)

The sound design team’s construction of this film is designed to place the viewer in this filmic space. They literally and with some irony (to me) ungrounded the sound so that any object creating a vibration or sound is traveling all around the viewer. Quite an amazing experience!

Back on earth, when listening to and experiencing the work of John Luther Adams, a contemporary composer, you can also find yourself immersed in a landscape (or seascape) that can be overwhelming, delightful, frightening, calming, awe-inducing, peaceful, evoking dread.

He explained in a recent interview,

“If we’re listening deeply, if we’re listening carefully, if we’re listening with our broadest awareness, both noise and silence lead us to the same understanding, which is that the whole world is music.
…everything we human animals do — everything we think, everything we speak, everything we are — derives from the world in which we live, and the deepest, most inexhaustible source for my work is the world in which I live. And yet, I’m not trying to reproduce anything that I hear or experience in the world. I’m more interested in the resonances that a bird song or a peel of thunder or the dance of the aurora borealis or the noise of the traffic on Central Park West might evoke in me. That meeting of my listening, my consciousness, my awareness: that’s the music that’s happening around us all the time.
I can’t separate my music from my life. Music is not what I do; music is how I understand the world. I hope that if I find myself in a singular place: wilderness, urban, indoors, outdoors, real, imaginary—doesn’t matter—if I find myself in a real place, a true place, and I am paying attention, then maybe I hear something that becomes music. If that happens, then I hope the music floats away, takes on a life of its own, and becomes something else to you when you hear it.”

“Adams has a careful, considered way of speaking which, by all indications, is quite similar to the way he works in the solitude of the small cabin he calls his composition studio in Alaska. In a pre-concert discussion before Inuksuit was performed, Adams noted that it wasn’t a site-specific work, but rather a site-determined piece. Listeners are invited to find the music in the space, wherever that may ultimately be. This takes his work beyond the idea that it is music that is about place and makes it music that is place. As an audience, we are invited to listen with him, hearing the world through his ears and also our own.”

As Adams continues, how he frames his life’s work, as an introverted creative person, certainly resonates with me.
His music is his muse, and he allows the process of discovery to take him where it will.

“My primary relationship with the work is still very much an introspective, lonely, solitary experience. And I wouldn’t have it any other way. I’ve always had this kind of bipolar life, but it’s a matter of keeping the internal and the external lives in balance. I can’t get enough of these wonderful performances by these incredible musicians, and it’s nice to occasionally get paid now for doing my work. It’s lovely that some people are taking note and writing about it. But I think as far as the rhythm of my life goes, the balance needs to be very much sort of 80/20, you know, solitary versus extroverted.”

“No one ever told me that I could have a career as a composer. No one ever told me I couldn’t. I just didn’t think in those terms, and I made all the wrong choices every step of the way. I made all the wrong career choices and I didn’t know what I was doing, but I think the music knew where it wanted me to go. By a series of happy accidents, and a few conscious choices and maybe the peculiarities of my own psyche, I kept making all the wrong choices, and that’s turned out to be the best possible thing that could have happened for the music and for the composer. If I’d come to New York as a kid and had been that hotshot young composer, I think that would have been a bad thing for me.”

“I retreated into the woods, and I started listening to birds. I listened for six months, learning the strange syllables one by one before I began writing things down. That for me was the beginning of the life’s work that’s continued ever since. That would have been 1974; I was 21.

As I’m teaching at Harvard now, and I’ve been teaching at Northwestern, I’m starting to understand how unconventional a path it’s been. I wasn’t aware of that because it’s just my life. And I still don’t know what I’m doing, and I hope I never do. When I find that I know what I’m doing, I’ll know I’m doing the wrong thing. For me, it’s this continuing process of discovery and exploration and taking on new things, following the curiosity, the fascination, and occasionally the wonder of creative work. I don’t think that’s something you understand while you’re doing it.”

More about his latest work and what the implications of what the music is saying through him, in Part 2.