‘The boundary between our heart and the rest of world is just a convention, waiting to be transcended.’

Jim Jarmusch, who has a unique cinematic vision, has a new film that has had its debut at Cannes this week titled ‘Paterson’.  For me most of his recent films have a poetic aspect to them in that they paint a picture involving the characters that inhabit each of them as opposed to being structured in a strictly narrative form. This latest effort continues in that vein in that it is a story of a bus driver who quietly listens and observes his surroundings with the heart of a poet. Partially influenced by the work of contemporary poet Ron Padgett, the character Paterson composes poems based on the small details of life.

Here is an example of Padgett’s work

“The morning coffee.I’m not sure why I drink it. Maybe it’s the ritual of the cup, the spoon, the hot water, the milk, and the little heap of brown grit, the way they come together to form a nail I can hang the
day on. It’s something to do between being asleep and being awake. Surely there’s something better to do, though, than to drink a cup of instant coffee. Such as meditate? About what? About having a cup of
coffee. A cup of coffee whose first drink is too hot and whose last drink is too cool, but whose many in-between drinks are, like Baby Bear’s porridge, just right. Papa Bear looks disgruntled. He removes his spectacles and swivels his eyes onto the cup that sits before Baby Bear, and then,
after a discrete cough, reaches over and picks it up. Baby Bear doesn’t understand this disruption of the morning routine. Papa Bear brings
the cup close to his face and peers at it intently. The cup shatters in his paw, explodes actually, sending fragments and brown liquid all over the
room. In a way it’s good that Mama Bear isn’t there. Better that she rest in her grave beyond the garden, unaware of what has happened to the world.”

Jarmusch in an interview described the relationship portrayed in the film between Paterson and his wife, who spends her days in creative pursuits as

“ a portrait of a very tender love of people who accept each other for who they are. Only Lovers Left Alive was very much the same. The pure form of love is letting people be who they are. It’s a Buddhist thing to be accepting.”

In the same interview he does not ignore the larger world we inhabit but leaves this small tale of two lovers as a poignant reminder of how we can bring beauty to our world even as catastrophe is upon us.

“There are things wrong in this world. The way people treat each other. For us human beings, time is limited on this planet. There are too many people and nature is soon going to rectify this. It is going to be difficult and tragic. We are already in the 6th mass extinction of species. We have to be very grateful for very small details of life. Like this moment here. Here we are talking about a film and it is just a ridiculous thing.”

Please read the rest of the interview here.

Finally it is always a treat for me to hear Jarmusch and his ensemble discuss the films. His graciousness and thoughtfulness toward his partners and those who ask or comment ab0ut his films is very inspiring. For those who enjoy press conferences, please see the short video below. 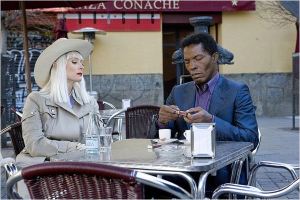 Tilda Swinton’s character in The Limits of Control has a line, “Movies are like dreams you’re never really sure you’ve had; sometimes my favorite films are the ones where people sit there and don’t say anything.”

Some movies tell stories. At one point in my life I fell in love with the idea of how movies tell stories or at least different types of stories. When I discovered European cinema and movies from Japan, they opened up whole new worlds for me.  Because I loved them so, I thought it might be a way for me to express myself creatively. I discovered that I am not a good story teller. There is some disconnect between the story in my head and how the idea gets translated onto film or onto paper. I can’t tell jokes for the same reason. I see the joke in my head but the punch line either comes out of sequence or I forget it all together. It has made for awkward moments at parties, until I realized it was better for me to laugh at someone else’s joke than try to tell one. I appreciate good stories and I love movies that tell a good yarn. I also love movies that have great ideas that inform them and will overlook some narrative shortcomings because the concept behind them appeals to me.

Having said that, when I was exposed to the world of what is referred to as experimental cinema (non-narrative, underground, avant-garde are other labels) the experience of watching them was more akin to reading poetry or being in a dream. Many of them opened up an inner world, sometimes wondrous, other times frightening, using different means to also tell a story, sometimes an ‘alternate’ narrative or sometimes to tell no story at all. There is a diverse universe with many voices in the film world, narrative and non-narrative alike – as there are in all the arts. I must admit that I find myself at home with many of these non-traditional artists – Jonas Mekas with his film diaries, Stan Brakhage with his multiple experiments with form and intent, Ken Jacobs’ work to change how we experience cinema, and countless others.  I enjoy the work of Jim Jarmusch and Terrence Malick as well, two American film-makers who work in the traditional narrative mode but who stretch the boundaries of what it means to be a story teller in this contemporary age. There are countless others to mention but this is not a film blog and there are plenty of writers out there who devote a lot of time and thought into the film-making world. The point of this entry is to try to explain some of my influences and inspirations, biases and inclinations –  all of this really for my own benefit to try to see why I create what I do. It is the daimonic impulse I am trying to explore.