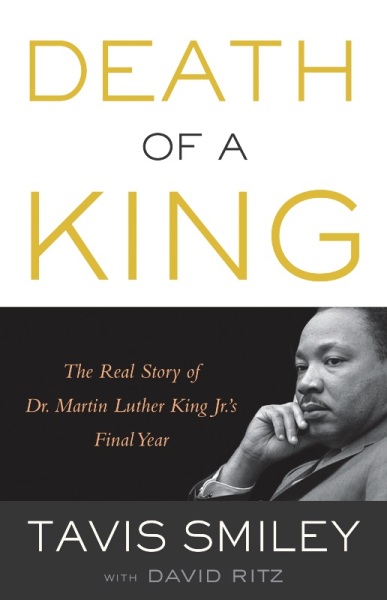 (from the publisher)  “Martin Luther King, Jr. died in one of the most shocking assassinations the world has known, but little is remembered about the life he led in his final year. Smiley recounts the final 365 days of King’s life, revealing the minister’s trials and tribulations—denunciations by the press, rejection from the president, dismissal by the country’s black middle class and militants, assaults on his character, ideology, and political tactics, to name a few—all of which he had to rise above in order to lead and address the racism, poverty, and militarism that threatened to destroy our democracy.”

In an excerpt from his book, Smiley recounts part of King’s speech at the Riverside Church in April 1967 – one year to the day before he was assassinated. A speech he argues that signed King’s death warrant and revealed the path he was already on, the path of what he calls ‘his dark and difficult days.’

“He quickly links the war—indeed, the very forces of militarism—to racism and poverty. Blacks are fighting and dying at almost twice their proportion of the population. He points to the “cruel irony of watching Negro and white boys on TV screens as they kill and die together for a nation that has been unable to seat them together at the same schools.” He speaks about the rioters who, in answer to his plea for nonviolence, question America’s own unchecked violence in Vietnam.”

“Their questions hit home,” he says, “and I knew that I could never again raise my voice against the violence of the oppressed in the ghettos without having first spoken clearly to the greatest purveyor of violence in the world today—my own government.”

“The greatest purveyor of violence in the world today.”

“The phrase will send shock waves through the media.”

Listen below as Tavis Smiley paints a picture of the last year of Martin Luther King Jr’s life, how his dream in 1963 has become in 67 a nightmare. How he was demonized before his death, the emotional and physical price he paid, and how he was deified and his message sanitized after his death. And how he uses King’s example of how to take on the difficult and painful responsibility and challenge of being a truth-teller in today’s world.

This entry was posted on January 18, 2015 by anelegantmystery. It was filed under inspiration and was tagged with Death of a King, Martin Luther King Jr, militarism, MLK, poverty, racism, Riverside Church, Tavis Smiley, truth-teller.