“I knew that the forces of nature were a language, was a way of life, could inform you. In other words, nature really was my teacher right from the beginning. And something happened in my life that related me to stone in particular – which I wasn’t aware of; I just loved stone. I loved the form, the shape, the texture, the arrangements. And in working with that with my camera, a very powerful impression came from a particular photograph of stone. And as with these poor mystics who are – you know, they’re infected with the devil; stuff comes at them, in them, through them. But this impression arrived, and it caused a set of words to rise in my mind. And it said, teachings from the ancient fathers. Here I am looking at a photograph I made of a stone wall, and I’m hearing the words, teachings from the ancient fathers.”

“…Then I saw – as we were doing research about whether we would go to Ireland or not, I saw photographs of certain kinds of stones. And I thought…there were the dolmans and Stonehenge and similar sites. And I thought, oh, yes. Yes. There’s something in there.” 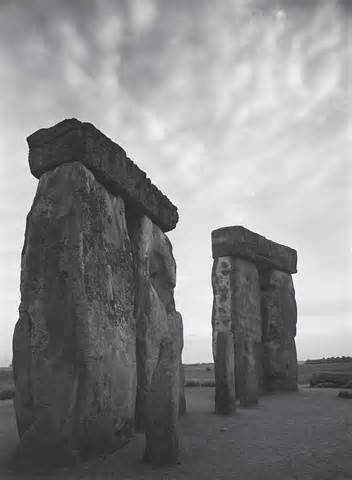 “I started in Ireland. I was actually going to do the high cross and the churches and the Celtic Christianity. But when I saw my first set of stones in the land, I thought, oh, my God. I was bewitched. Something snapped, and I blindly just went for them. I thought, you know, the more I address them, the more I’m with them, the more I could possibly understand.

“…they had to put a fence around it by – I think it was 1977 is when they put up the fence because between ’74, ’75, and ’77, there was a great deal of vandalism. A lot of hippies thought that they should take it over. There was a lot of activity, and resentment that they were not allowed…to play latter day Druids…they wanted association, these people, with the sites. They were denied it by the keepers all. And so, you know, they would go and spray paint on the damn thing, peace signs and – so they had to fence it off.”

“When I first went there, it was totally – the only device they had – there were no fences, but they had a device where…the ground…surrounding the whole monument, was sensitive to touch. They would switch [it] on in the main guard room. They would switch it on when they left. They’d open the gates at 9:00, switch off the power, and keep it off until 5:00 when they closed the monument officially. Then they’d put on the alarm. If anybody walked within a certain distance of the monument, the alarm would go off and the police would come. So that was the protection they had. Otherwise…you had the open space. And I took advantage of that because I started photographing it in ’67. And I continued photographing it right through ’72. I think my last photographs were in ’77. I made some in ’77 without the fences. I went back every year and spent a few weeks with the place, just photographing it.”

“Well, when did the great Celtic revival come in? I’d say somewhere around the ’70s. The New Age people hooked into the Celtic as being one of the really strong holders of that power of that thinking and idea of Mother Goddess, God being a woman rather than a man, all that kind of stuff, that whole revival of the pagan and Druid thinking. I’d say that is what pulled those stones into focus in the world in general, the realization that…these were power sites. They were places chosen by the ancients who knew what the earth energies were about and would build their sites on particular pieces of land that have that extra strength or energy that could affect a human being.”

“I worked simultaneously not only for what to me was the best facet of that particular stone as a sculptural entity, but also to try to pick up the atmosphere of the groupings of stones. So that was the task I had, which I didn’t realize at the beginning. And I didn’t realize what the hell was happening. You know, my first two years were – I was mystified. But I was also impelled. And as I was working with those stones trying to understand them – and the archeologists were always after me: “What the hell are you doing exactly?” “I don’t know. When I find out, I’ll let you know. I just got a photograph.” And then it hit me, bam, teachings from the ancient fathers. It was a stone wall that gave that phrase to my brain and teased me in my emotions. And when I got to these sites and I was totally caught, and thought, I’m done, I can only follow my instincts here and work, I thought, here, yes, are the teachings from the ancient fathers through stone. I thought that was an interesting dimension, an internal dimension, of…an affirmation of the silent realm informing you and having a validity because you keep running into it.”

“Yes. And in that sense, time is telescoped. The accordion is closed. And I thought that was no different between that time I made the photograph of that rock wall to the time that I recognized that the stone was really the medium and that nature somehow beats out an energy that informs you.” 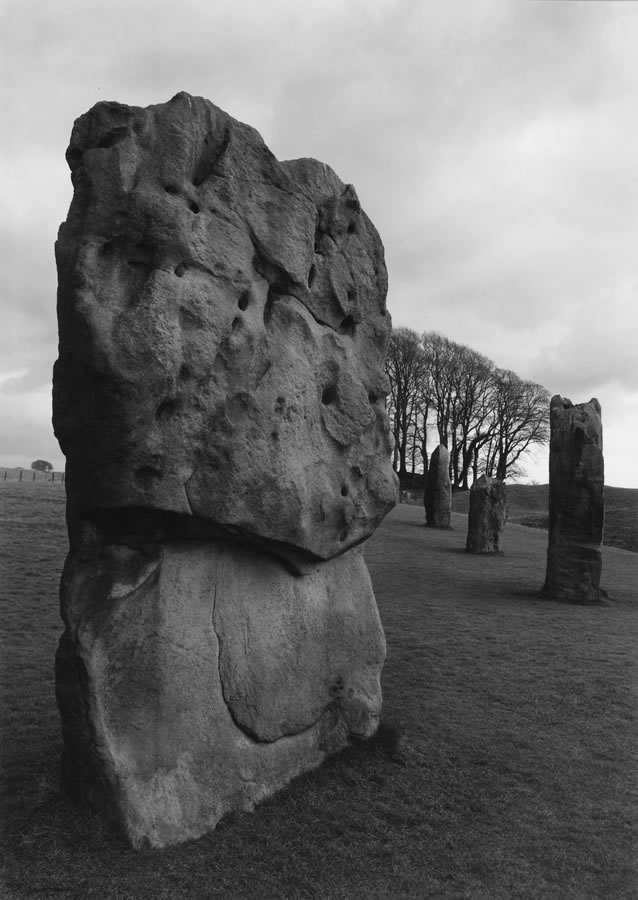 “You know, when I met those stones, one of them, as I tried to photograph it, you know, leaned forward imperceptibly and said, “What do you want?” It said, “What do you want?” And in it was like two paragraphs: Why that angle? Why this particular place at this time? What is your purpose? What – you know, it just sort of said, what do you want? And I backed off because I knew that I was after a composition. And I had my zone system and I could master the light, whatever the light would be, and blah blah blah, all my rationalizing, intellectualizing, composualizing [sic]. And the stone said, “That’s not what you’re here for.”

“Right. And I left. I just stopped right in my tracks, and I went and had a cup of tea and a pork pie at the stand, and just sort of sat back and thought, well, you’re either going crazy or something’s happening, you know. So I bravely after a few hours went back and very cautiously. What it said was, you know, you’re not here for any of what you know. You’re here to learn. And just bring us your craft. Use it. You’ll be informed as you work. And that’s what was happening. It was like – this was a…very complex design.” 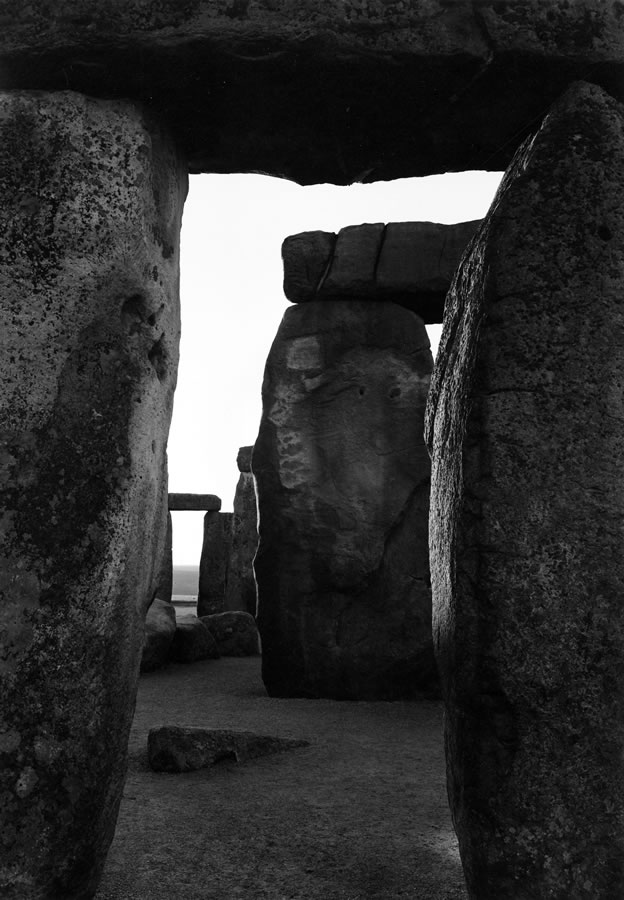 ” Well, that’s exactly what the stone was telling me. You know, be careful. We know what you’re here for. All you need to do is keep your craft handy. Your craft is. It does not think, you know. And when you arrive at the state of being an emotional archeologist and not the average archeologist who digs, you are digging emotionally and you will be informed through that realm.”

” …A few of the guards were sensitive to the fact that this kid was not playing around. He’s quite dedicated and serious. Why would he come back so often and – you know, he has that something about him that you know that he’s after something. So they would let me in at 5:00 in the morning. They would turn off the power. I would walk across the lawn leading up to the hedge. And I could work until 9:00 when everyone was allowed to go through the gates. So I had that free time.”

“Then at 5:00, everybody would go home and they would lock the gates to them. But they would leave the power off until I finished my work. And that could be a few hours later. So they allowed me that time extra, without people. And then during the day, I just very carefully and patiently would see that, well, there’s a photograph here. And I would get my camera set up and wait until a group of people were hidden behind the stones and get my exposure, and then they would continue. So a lot of jockeying at that time. But mostly, they allowed me to be there at hours when nobody else was.”

“Oh, it was wonderful. It was wonderful. And I brought back – when it was finished…a portfolio of twelve images of Stonehenge, twelve of what I thought were the best, and I wrote a piece about what I felt there, and I ceremoniously gave it to the head guard that used to take care of Stonehenge, Tom Woodhouse. And he said, “Well, you know, we’ve got this big fence up. But I think this wants to be brought into the center of the stone, so let’s go. Just look for all the world as if you’re an archeologist; behave as if you are, and we’ll step over the fence,” which we did. We went into there and laid it on the center stone, and then we walked it completely around the stones, offered it to Stonehenge, and left it in the guard house. And I said, “This is, you know, for you to share with anybody.” He kept it for a year and said, “It’s too good a piece to be just hanging around here. So I have donated it in your name to the Wiltshire Museum,” which, you know, has done archeological work on all these places… The Wiltshire Museum, which is very – it’s right across from the Salisbury Cathedral.” 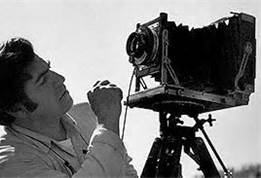 This entry was posted on August 18, 2013 by anelegantmystery. It was filed under photography and was tagged with mysticism, Paul Caponigro, Stonehenge.